Created in November, 2002, Araucaria is a small French association governed by the law of July 1st, 1901. Its object, registered in its statutes, is “to promote and realize projects favoring, in particular, the education and the health of the children”. Its action takes place in France or in developing countries.

It is thus of general interest, without any remuneration nor profit for its members, every volunteers.

Both principles of Araucaria are:

Araucaria realized, since 2002, projects in Africa, in Haiti, in India and in Nepal.

2002: financing of an open-heart surgery and an intervention by catheter in the Institute of the Heart of Maputo (Mozambique)

2008: rehabilitation and equipment of a health center in Burkina Faso

2008 – 2011: implementation of a farm of spiruline in Pondicherry in India

2013 – 2014: reconstruction and equipment of a primary school in Chyaksa danda in Nepal 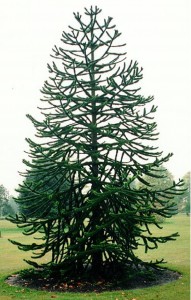 At first, it is the tree which grows abundantly in the country where we began our first project at the beginning of 2000s: Mozambique.

Its familiar name is also the Despair of the Monkeys because they manage to rise easily there but cannot get down without difficulty because of needles growing towards the sky. We want that it goes in the same way for the realization of our project: when we climb, what can be the difficulties, we have no other alternative than to go up always, continue our projects until their good end!

Chain of the Hope: www.chainedelespoir.org